“It is an unarguable fact,” says The Independent, “Bellucci is aesthetically pleasing.”

That is a statement that’s difficult to overstate. Straddling the world of European cinema — like her aesthetic predecessors Sophia Loren and Claudia Cardinale — Monica Bellucci is a paragon of the timeless, elegant beauty written about, painted about, and ogled over for centuries.

She embodies the curves and the words of mid-century European conceptions of femininity, which combine beauty and brains into the sort of personality that both outlast and stand apart from the everyday pretty young things that come and go. This was exemplified in the gasps of delight that accompanied her presence in the Matrix movies, when she was well beyond the age typically associated in contemporary times with sex symbols. And, doubtlessly, those gasps will be echoed when she appears on screen as the next Bond girl (woman) in Spectre.

The Daniel Craig films have become increasingly serious one after another. On the one hand, this is truer to the original books of Ian Fleming, which are suffused with an under-layer of danger. But, on the other hand, the need to be uber-serious in the recent films was felt, in part, to be because of the success of the campy Austin Powers pictures, which took the wind out of the sail of any attempt by future Bond films to be good-time romps. 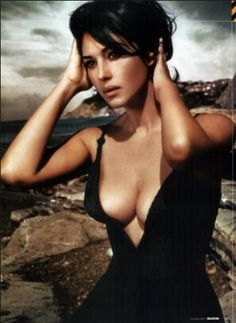 There is, however, a balance to be struck between the perhaps depressingly self-exploratory, dark hero films of recent times and the more light-hearted, aspirational hero films of the 90’s and before. Perhaps the spectre of old-world beauty that will be channeled by Monica Bellucci in the new film will allow for a veneer of seriousness, with an underbelly of amusement, and a twist of charm.

Either way you slice it, seeing the grandness that is Monica Bellucci will be anything but boring.